Posted on October 7, 2014 by JonesGardenBlog

As I’ve mentioned before, we have two seasons here in the desert of Arizona.  The first season just finished, it is known as Why do we live here? (WDWLH?), and the second, and more wonderful season, is Everybody wants to live here.

It’s no secret which one I prefer.

The Why do we live here? season was a very busy one this year.  Personally, professionally, and even in the garden.

Fortunately things have settled down on one front.

I’ve started to get a grip on things in the garden.

The grapevine grew amazingly this WDWLH?  but did not produce any grapes.   I will prune and train it appropriately this year and next summer should be good.  The third year is supposed to be the first good year for grapes in AZ. 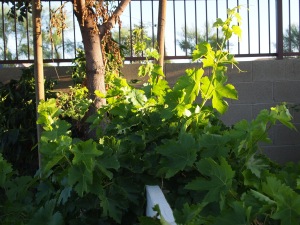 All of the clay pots have been emptied and four out of six of the beds have been cleaned out. 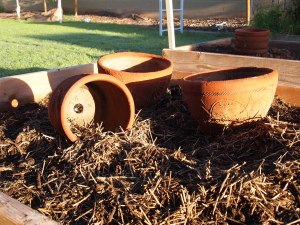 The watermelons went crazy, even as the beans and artichokes died off.  The result was a jungle and a mess. 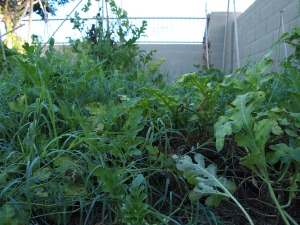 But even that has been cleaned out now.

The only thing left from WDWLH? season are the peppers.  October and November are the best time for peppers in Arizona and they are just starting to really fill out in volume.

The days are still warm, normally into the 90s, but the nights have cooled off nicely, down into the 60s.  We’ve even had several storms with heavy amounts of rain.  It may not seem like much to some, but areas around the valley received more than four inches of rain, roughly half of a YEAR’s worth in one day. It wasn’t quite so bad here, but it was still significant.

We are supposed to get another storm tomorrow.  Fortunately a lot of my planting is already finished.

Have a blessed day!