Posted on June 2, 2014 by JonesGardenBlog

Last year was a mess with the corn.  It came up so pretty, grew tall and then began to bow… I have no idea why.  It was horrible.  I named it the stupid corn.

However… I just can’t give up on this.  There is something about corn that just says, “THIS IS A GARDEN!”  Fail or not, I have to try.

So this year I tried something different.  It started last year, shortly after removing the stupid corn.  I mulched the whole area about two feet deep.  I watered occasionally.  It kept any weeds from really taking root in the area during the winter and my hopes were that it was improving the composition of the soil.

This weekend the trials began.

It was a nice day on Saturday, low hundreds, probably in the 105 range, but I’m just guessing here.

Last year I had a flat area that I had amended and planted densely in no particular pattern.  Tight grouping to get better pollination was the thought.  It failed.  My best guess is that the heavy feeding corn drained the nutrients from the soil and became deficient.  The flat area began to fall in certain areas and low spots developed.  Some areas had adequate water, some were a little parched.

This year I went for straight rows, 20 inches apart, approximately 6 inch spacing in the row.  Very similar to what I have observed the commercial growers doing in the area.  I dug down a bit and then poked holes and planted.  The trenches allow me to fully flood the area where the seeds are.  As the plants grow some of that dirt will go back in the trenches and the watering strategy will morph with some specialized contraptions that now only exist in my head.  It’s a fluid situation, but there is definitely a plan.

By the time the mulch was moved and the trenches were done I was pretty pooped.  My planting crew of three “volunteers” came out and helped plant the seeds.  It was over quickly and deeply watered.

We’ve officially reached, “Why do I live here!”  season.  Not nearly as much fun as the “Everybody wishes they lived here!” season, which thankfully is much longer than the current season.

Everything else seems to be undaunted by the temps.  Plenty of water.  Topping off the ollas every day.  They seem to be working like a charm.  It was 105 the other day and my zucchini plants were perky and producing.  Nice!

We’ve started the great squash harvest of 2014.  My son saw the first two on the counter and said, “well, if it’s anything like last year I’m sure there will be two BILLION more.”  Gotta love the zukes like that!

Now for the only picture today.  I was noticing a little Old Time Tennessee melon developing.  The first of the melons this year.  It was about an inch long.  While I stooped down near some of the other vines I happened to notice this guy hiding in the leaves. 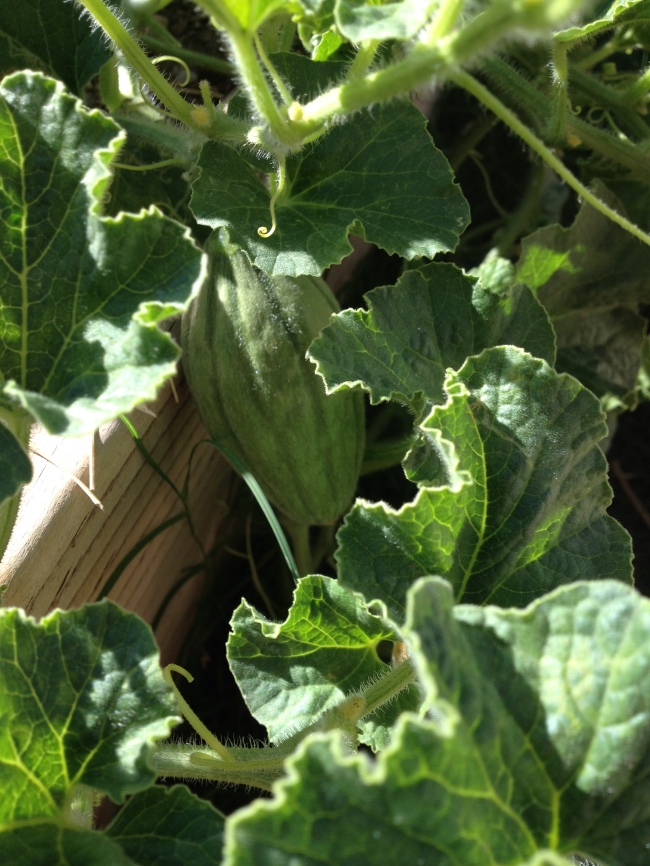 Very exciting!  There is another one, slightly smaller that is nearby.  Seems like the first ones always sneak up on me.  Cucumbers should be producing soon.  Yellow squash are starting to come in.  Butternuts are vining out all over the place.  Melon vines are everywhere.

I have a dream that at some point this summer we will be eating sweet corn with dinner and having a tri-colored watermelon salad for dessert.  (Desert King – Yellow, Orange Tender Sweet, and Charleston Gray – Red)

We started harvesting the bigger tomatoes.  Lots of splits.  I’m trying to figure out why but we’ve been eating what we can.  The flavor is delicious.  Smaller tomatoes are a daily occurrence.  Very tasty right off of the vine.  Some never make it in the house.

I hope your spring/summer garden is coming along.  I’ll show you some pics of the new AWESOME corn once the straws start to appear.

Have a blessed week!

Linked at the Homestead Barn Hop

10 Responses to Changing Stupid to Awesome