Growth In Spite of the Neglect

Posted on January 16, 2014 by JonesGardenBlog

The winter garden, or what is left after some neglect, is eeking through the season.  The sun almost completely leaves our back yard around the end of December and then slowly starts to show itself again.  I’ve actually tried reflectors and things to get more light on the garden, but I mainly end up annoying myself and probably the neighbors.  The plants that started growing during the fall just kind of… pause… then resume growing when they have decent light to do it.

A couple of the plants didn’t get the memo.  Instead of “pausing”, they decided to leapfrog the whole process and bolt.  I can’t understand that.  Of course it was on the bok choi and the Chinese cabbage, two things that I haven’t tried before.  I cut the tops off and fed them to the chickens, who were very grateful for a very brief period of time.

What I don’t like is the mess and by mess I mean, “WOW, WHAT one EARTH happened to the back porch!? “  It appears that the porch is a great place to… relieve yourself… if you’re a chicken.

Come to think of it I think out chickens are suffering from a sense of entitlement as well.  Not only do they like being on the porch, but they really like to stand there, looking into the window, and squawking as loud as possible.  You can feed them, give them fresh water, fresh scratch, even  some greens, and in ten minutes they will be back looking in the window with their heads slightly tilted.  Just staring… and squawking.

I’m sure there is a horror story there somewhere, some barnyard version of an Alfred Hitchcock movie.

In any case I have a lot of clean up to do this weekend and I need to get some seeds started for spring.  I have 4 of my needed 12 ollas, along with an extensive collection of wine bottles.  I’m hoping to collect at least two more of the nice ollas, that will give me enough for two of the 4 x 8 beds.

And my Jerusalem artichokes should be here any time…

Several of the broccoli have “paused”, but a couple were more in the light and are starting to head.

Sorry for the dark picture, I tried to improve it, but… yah, I’m not great at the photo editing stuff.  But this is my big artichoke plant.  I’ve got a couple of other smaller ones that I am going to sneak into my front yard landscaping. 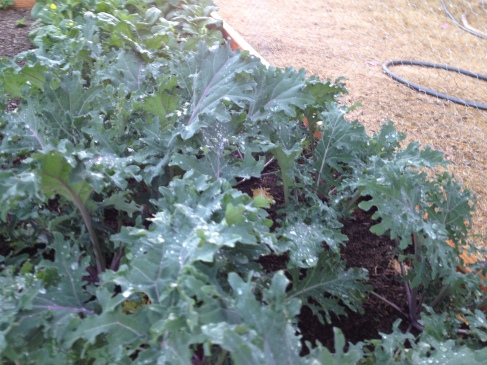 This is the red Russian kale.  It doesn’t seem to care that it has been out of direct light for months now.  Low light, no problem.  Kind of strange, but it has taken off like crazy.  Had some in a smoothie this morning.  Yummy!

Blurry picture trying to lean over the chicken wire and take it.  The purple/red stuff is red romaine.  Again, it’s been out of the light for quite a while, but some of it is close to being ready. 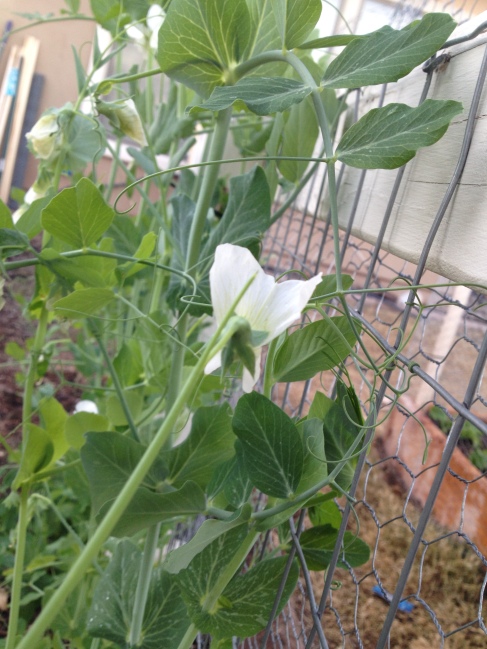 The peas are looking okay.  Haven’t gotten more than a handful yet and none actually made it into the house… ahem… but I’m still holding out hope that we’ll get some.  The chickens have been doing their best to get at them through the fence.  Just one more reason the ladies are going to get locked back up.  It’s kind of sad, but… necessary I think.  They have abundant room in their run, but I think they’ll squawk up a storm about being confined.  Of course they are squawking anyway, so no real change there.

Anybody getting ready for spring?

21 Responses to Growth In Spite of the Neglect