Demo Continues in the Garden

Part of getting the garden ready for fall/winter is moving out the plants that are ‘done’ for the summer.  Most of the plants do great through spring and start to struggle as the heat gets turned up in the AZ oven.

Some of them do fine and even thrive.

The squash and zucchini are struggling quite a bit.  Even after being heavily watered in the morning they are wilting in the afternoon heat.  The two zucchini that I pulled in this morning were big, but they looked like they were from the land of misfit toys.  I’ll add a picture later if I get a chance, but I think you get the idea. 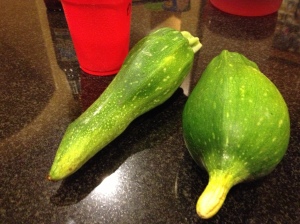 In any case, the tomatoes performed valiantly.  They produced decent amounts of extremely tasty fruit.  I don’t think I can eat a taco now with just regular tomatoes.  They were awesome.  But… no new blossoms and the last fruit to mature were getting smaller by the minute.  The vines looked pathetic and were a tangled mass that had become a haven for a variety of little bugs.  They were done.  I ripped them all out this morning except for one in the back.  It actually had three decent sized tomatoes on it, so it gets a reprieve until those ripen up.  One more batch of tacos!

One of the things I did this year with the tomatoes was follow the concept of the “tomato jungle”.  It has a lot of benefits including increased shade to the plants, but I found it very difficult to get to the fruit and I think I might have had better production if there had been a little more air flow around the plants.  I think I’ll follow a more traditional square foot gardening technique next year, single vine, and definitely a different support system.

In any case, they were a success… and now we’ve got a spot that will be a great place to put the first fall/winter starts… come September.  In the meantime, I’ll bury it in a couple of inches of mulch to maintain the healthy soil that is there.

11 Responses to Demo Continues in the Garden