Why I Start with Raised Beds

Posted on October 20, 2014 by JonesGardenBlog

How do I start a garden?

That’s what I asked myself several years ago when I started with a blank slate of a back yard.  I really had no idea what I was doing and I was starting with some of the worst possible conditions I could imagine.  Some places have hard soil.  We have caliche.

The clay in the soil gets wet, then bakes in the hot AZ son.  Wet, bake, wet, bake… and the result is equivalent to concrete.

When I was building my first raised beds I was told by someone that I needed to dig through this soil to get drainage for my garden.  So I dug… two feet down… through caliche… with a railroad pick.  It took FOREVER.  The first time I tried to break through the soil I took my railroad pick and started swinging.  I’m not a lightweight, but that 12 pound railroad pick bounced… and sparked… on the concrete that was my backyard.  I wet it down and left it.  It never soaked in more than a quarter inch.  It evaporated.  It was terrible. 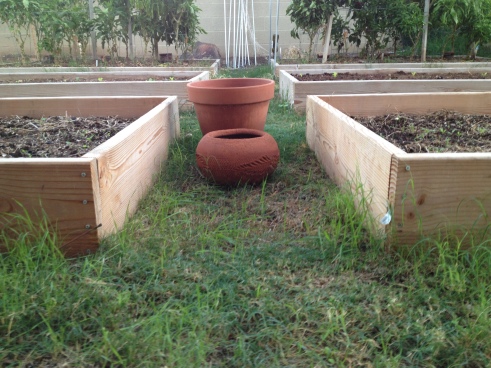 I’ve learned at least a little over the years, so if I was starting again I would do it a little bit different.

Raised beds have certain advantages over a traditional garden.

– They are higher up and so are a little easier to get into.

– The area is well defined which gives you a better chance of keeping your kids and your pets out of it.

– It allows you to concentrate your soil resources into one confined area that can be densely planted.

– It will warm up faster in the spring (if that is a concern for you).

– If you are using ollas, you can actually put the olla in place as you fill the bed, making the initial placement easier. 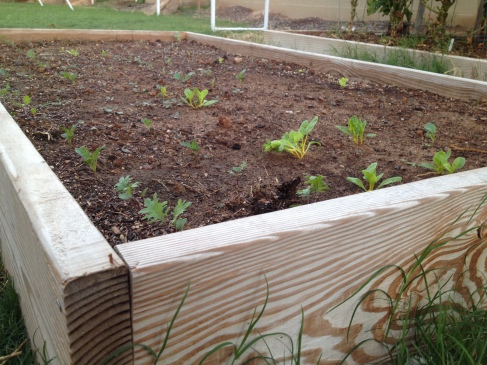 Of course, raised beds don’t last and eventually the wood will rot.  That’s true, although from my experience it takes longer than you think.  But even so, it’s not necessarily a bad thing.

As you water your raised bed you are providing a nutrient dense compost tea to the area underneath and around the bed.  Over a few years even hard caliche will soften and improve.  By the time the wood has rotted and needs to be removed your garden soil has gone from bad to better.  The ground has gone from unmanageable, to easily workable.  Instead of a railroad pick you can easily use a shovel.

If I was starting from scratch, I would consider the following things.

– Put several raised beds in that area but start small.  Add a couple more next season or next year.  Organize the first ones though in a way that makes sense as you add them.

– Put those beds right on top of the soil, no need to dig down.  You may get some muddy spots around your bed.  If this is a problem throw down some mulch around your beds.  A good, mostly composted wood mulch will absorb a lot of water and continue to improve the soil.

If you like the raised beds you can remove the soil, rebuild the box, and put everything back together.  If you decide to turn the whole area into a traditional garden, then your soil will be ready to go!

What do you think, fellow gardeners?  If you had to start from scratch how would you do it?

This post is linked on the Homestead Barn Hop at The Prairie Homestead.

3 Responses to Why I Start with Raised Beds