Awesome to PATHETIC… the Corn Story of 2014

Posted on August 12, 2014 by JonesGardenBlog

So the corn of 2013 was the Stupid Corn.  I worked hard this year to rectify that situation and I changed a lot of things.  I learned.  I paid attention.  i was DILIGENT.  I wanted AWESOME corn.

I got… PATHETIC corn.

And I’m a little frustrated with that.

My wife (the amazing cook) equated it to working REALLY hard on a recipe and the dish just doesn’t turn out like you expected.  Yah, it’s kind of like that.

Where I went wrong this year was pollination… and maybe watering… and obviously something else, but I honestly have no idea what.

This is the pollination problem.

Now, I do have to say that the kernels that are there… were really tasty.  We just took a few of these pathetic ears and cut the corn off and cooked it off the cob.  It was good.

This is the best looking one I found.  If they had all been like this one, I would have felt pretty good about the corn. 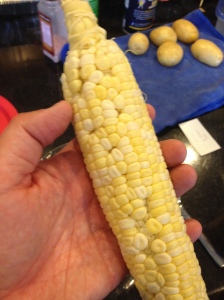 The kernels are a little bit dimpled.  I’m not sure if this is from leaving them on the stalk toO long or not enough water or… But they tasted good.

I pulled in the last of them this morning and the dimpling seems to have gotten worse. 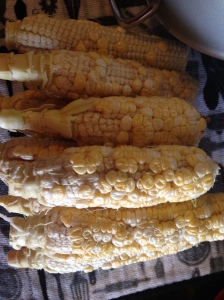 These are just sad.

But not quite as sad as this one.  Now, I had a few like this and if you can tell me what this is I would appreciate it.  If you can’t… and if it scares you a little bit… I’m sorry.

In the husk.  Looks… sort of okay. 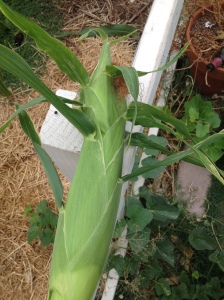 Out of the husk… I’m not sure what alien came down and possessed this mutant corn, but it was terrible looking.  I didn’t even put it in the compost, I trashed it… thought about burning it but I couldn’t figure out what to do with the mutant ash.  Yuck! 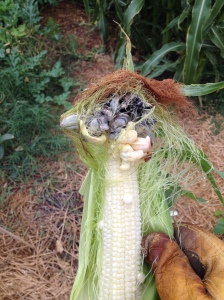 So this is the time of the year where I say, “you know, Jones, you just don’t have enough space to really grow corn, you should probably give up trying and focus on other crops.”

This entry was posted in corn. Bookmark the permalink.

14 Responses to Awesome to PATHETIC… the Corn Story of 2014