The Case of the Little Peppers

Posted on September 17, 2013 by JonesGardenBlog

Peppers have been a challenge for me.  I started these from seed, experimented with the shading and direct light, and some variations in watering.  For a long time I had a great system going where I would water heavily one day and refill my wine bottle ollas the next.  It worked great until everything turned into a big mass of green and made moving around the garden difficult.

So this is the pepper problem.  Great looking plants, tons of peppers, but all of them have been… tiny.  My jalapenos have been more like buttons – ripe, red buttons.  I’ve eaten M&Ms that were bigger than these things (seriously, the mint ones that are a little bit bigger, so good).  The New Mexico peppers, which should be GOOD SIZED peppers, were getting two to three inches long and turning red.  Grrrr!!!!

Don’t get me wrong, they have good flavor.  If you are patient you can put them in the oven on broil and roast them up.  I ate several that way, they just take FOREVER and you get very little chili.  Not ideal.

So I started doing research on the topic.

Just an FYI, you want to avoid Google search phrases like, “Why are my peppers so small?”  Nuff said on that.

The only thing that people mentioned was that it was the type of pepper that I planted.

EEEEE!!!  No, that’s incorrect!  Thanks for playing.

Then somebody pointed out that peppers are mainly water.  Ding!

#1 All of the plants are producing MORE peppers or flowers.  Good sign.

#2 The NM Peppers in particular are getting bigger and are not turning red yet.  🙂 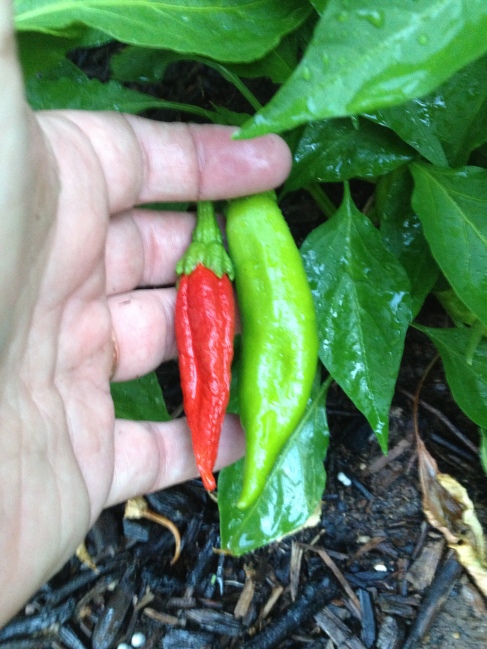 For next year i have started purchasing real ollas.  I think these are going to be the best solution for my spring/summer garden, especially when it comes to the tomatoes and the peppers.

Have a blessed day!

11 Responses to The Case of the Little Peppers